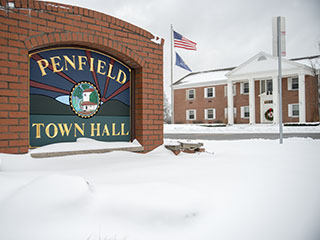 Public comments overwhelmingly favored continuation of the Town of Penfield’s moratorium against any land-use decisions for the parcel of land formerly operated as Shadow Pines Golf Course, during a public hearing on Wednesday, March 1, at the Penfield Town Hall.

While the Town Board will not vote until March 15, an informal polling of the Board by one of the speakers at the public hearing indicated unanimous support for continuing it.

In opening the public hearing, Penfield Supervisor Tony La Fountain said that the town put the moratorium in place a year ago to allow for discussions and negotiations regarding maintaining land use that is compatible with the quality of life enjoyed by Penfield residents.

Town Board members Paula Metzler and Andy Moore both spoke in favor of continuing the moratorium. Both are running for re-election this year.

A neighbor from Huntington Meadow said that the possibility of a massive housing development on the site had driven down property values in the neighborhood. She also spoke about the difficulty making left-hand turns from and onto the street during certain times of the day.

The next speaker was Abigail Ogie, young daughter of Samuel Ogie, a member of the town’s Shadow Pines Steering Committee. Abigail said that she liked green space and the town should keep the moratorium. Her father spoke about the tremendous amount of public support, not just for the moratorium, but also for keeping the golf course as open, green space.

John Seal, owner of Dolomite, which owns the Shadow Pines site, said he is willing to work with the town, but hoped that perhaps a moratorium of just six months with an option to renew might also accomplish the town’s goal. He spoke about his company’s expenses, giving the Clark House as an example. He said his company keeps the heat on in the winter and maintains security lighting as he hoped to see that structure used again. Dolomite also owns the gravel pit on the other side of Whalen Road. Dolomite has indicated to the town that sometime over the next 10 or so years, they will have extracted all the gravel they can and will shut the quarry and asphalt plant. At that time, the company would let the quarry fill in, creating a lake that it would give to the town for recreational purposes.

Bob Peterson, who chaired the moratorium steering committee, said he was glad that Seal was there, spoke about the potential for combining the Shadow Pines open space with the future Dolomite lake into a lovely recreational area for the town.

Jeff Burns, instrumental in establishing the Save Shadow Pines group, pointed out that the group has 1500 members who favor green space for the site. Carol Samuel said that the board should not consider a six-month moratorium but go for the whole year.

Kate McArdle, PTA member from Cobbles School and Leader of the Penfield Democratic Committee, spoke about the burden a housing development would have on the school district, including new classrooms and teachers, causing an increase in school taxes. She also asked what had happened since the moratorium was first enacted.

La Fountain said the groundwork has been done, including an appraisal of the land. He said there was a lot of due diligence work yet to be done. For example, he said there are environmental concerns that the Town needs to understand so that town residents are not liable down the road for pre-existing conditions.

Before the hearing on the Shadow Pines moratorium, the Town Board had two other public hearings.

The first was for the property at the southwest corner of Five Mile Line Road and Liberty Street. The proposal involves cutting down all the trees on the site and demolishing a small two-story house to build a one-story concrete block/stucco ranch structure in an historical district. The Board had concerns about such things as parking, and an enclosed dumpster.

The second proposal came from two brothers who propose to establish a microbrewery, called K2, near the Agway property at 1212 Empire Boulevard. They will make and serve craft beer and snacks. Any major events will be catered or have food trucks as they do not plan a commercial kitchen. Their target audience is beer-aficionados, and they will do sampling, tasting as well as serving their beer. They will fill growlers, but have no plans to sell six packs. The Board was concerned with the number of drinking establishments on that part of Empire Boulevard, and realized that issue is one regulated by New York State.

The Town Board will discuss internal questions it has regarding these projects at its work session on Wednesday, March 8 in the Town Hall.

One thought on “Breakdown of the March 1st Town Board Meeting”

Interested in joining the Penfield Democratic Committee? Come to a meeting to learn more! The PDC meets the 4th Tuesday of each month in the Senior Lounge at the Penfield Community Center, 1985 Baird Rd. Visit our website: www.penfielddemocrats.org!