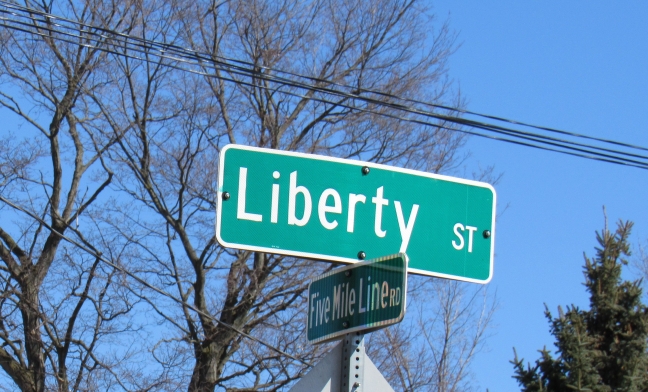 I initially started writing this post in March, 2017, but never finished it, having been waylaid by other commitments. I realize one blog post can’t stop the wheels of government, but given what has been lost since then, I’d feel better knowing I had raised an alarm, at least in writing.  Better late than never, I guess.

Written about here, at the legislative meeting of the Penfield Town Board in March of 2017, plans were presented for a new dental office to be built at the southwest corner of Five Mile Line Road and Liberty Street. The dentist, who currently operates his practice from a building literally across the street, was present, as were the owner of the property in question and the architect responsible for the new building’s design. As covered in TNPO’s original blog post about this meeting, “the proposal involves cutting down all the trees on the site and demolishing a small two-story house to build a one-story concrete block/stucco ranch structure in an historical district. The Board had concerns about such things as parking, and an enclosed dumpster.”

Let me be clear: I am not telling any business owner what they should or should not do to accommodate their business’s growth, nor any property owner what to do with their land…this post is not about that. What this post IS about is what the Penfield community stands to gain and to lose, on a variety of levels, from the decisions made by our elected officials. Continuous, hodge-podge development has its consequences, and is a reason municipalities have Comprehensive Plans. I have yet to meet one Penfielder who believes the motto of “the Town of Planned Progress” is accurate.

The address in question (2099 Five Mile Line Road) is roughly one block from the Four Corners, which lies within one of 3 historic districts in Penfield. Traffic through this area is a constant problem thanks to its proximity to Route 441 and the roads’ inability to accommodate the volume. Depending on the time of day, vehicles can be backed up all the way to the High School and sometimes even further north. At other times of day, the Four Corners is generally busy with school buses, commuters speeding along 441 to or from work, students on their way for a slice from any of the 3 pizza joints surrounding this intersection, the rare shopper looking for a parking spot, and as I witnessed just yesterday, 16-wheelers trying to make a tight turn onto Five Mile Line Road, causing all the backed up traffic to back up further in order to accommodate it.

A cluster-fughese to be sure.

At the March, 2017 public hearing, Board members asked the owner of the property what would happen to the small yellow building located there? The response: if the project was not approved, it would continue to be a rental, however if approved, it would be demolished. At that meeting at least, no mention was made of this building’s history as the first public library in Penfield located within an Historical Preservation Overlay District (“HPOD”). Last month, I requested both the Certificate of Appropriateness and the demolition permit for the former library from the Town Clerk’s office and received a document from 2008 that listed it as such, so we have confirmation that the fact was known and able to be easily found. (I myself was made aware of this when I stopped to speak with 2 residents of the Covey House about the construction that left them without access to their parking spaces. I then confirmed this with the Local History Room). Whether the Town Board members knew the history of this building, or they didn’t, the decision to tear it down is short-sighted and sad. This is at least the 2nd building within an HPOD to be demolished in the last 5 years. The other being the site of Little Nellie Williams‘ newspaper office, now a Mark’s Pizzeria. While the Zoning and Planning Boards are responsible for the review and approval of much of Penfield’s development proposals, there are a few distinct areas within town limits in which the Town Board makes these decisions; the Four Corners is one such area.

The Historic Preservation Ordinance of the Town of Penfield was adopted under Irene Gossin’s leadership in 1973. Its purpose is to:

“Preserve the historical and architectural character of certain sites, structures or districts [hereinafter collectively referred to as “property(ies)”] within the Town of Penfield.

Prevent impairment of or injury to the historical, architectural and cultural value to the community of the property(ies).

Provide that a reasonable degree of control may be exercised over alterations to such property(ies) and over the alteration, architectural design and construction of structures erected or to be erected on any such sites or in such districts.
Foster civic pride in the accomplishments of the past.
Protect and enhance Penfield’s attractiveness to visitors.
Support and stimulate the economic activities provided by tourism.
Stabilize and improve property values.
Ensure the harmonious, orderly, and efficient growth and development of the Town.
Historic preservation (HP) regulations are not intended to be substituted for other zoning regulations, but are to be superimposed on the primary zoning regulations and represent an additional level of review and regulation related specifically to the preservation of Penfield landmarks, landmark sites and all properties within an Historic Preservation Overlay District.”
***********************************************************************************
I would argue that, with creative thinking and planning, the original building that housed Penfield’s first public library could have been saved and used in such a way as to fulfill some of the tenets of the Historic Preservation Ordinance outlined above. I don’t see how a newly built dental office fits any of these points; most definitely it does not “ensure…harmonious…or efficient growth and development” within the town. It seems chaotic, off-the-cuff, and unplanned to me. If these HP regulations are supposed to provide increased scrutiny of, and protection to, significant places, why was our town’s first public library allowed to be demolished? I don’t understand why we pretend the Historic Preservation Board or Ordinance have any power over saving our historic places; if they did, it is within the scope of their responsibilities to do just that. I do expect that our elected officials, who have taken on the responsibility for this historic preservation district, to fulfill the tenets of the HP Ordinance over random NEW construction, new construction for an already existing business within this same special zoning district.
The National Trust for Historic Preservation published an interesting article on the 6 main reasons for saving old buildings, stating that it is beneficial for both cultural and economic reasons. Historic properties are built with better quality materials and different standards (aka: they are built to last).  “…businesses–-such as bookstores, ethnic restaurants, antique stores, neighborhood pubs, and especially small start-ups―thrive in old buildings” and can make a town a unique destination.
The last of author Julia Rocchi’s reasons tugs at the heart: “Regret goes only one way. The preservation of historic buildings is a one-way street. There is no chance to renovate or to save a historic site once it’s gone. And we can never be certain what will be valued in the future. This reality brings to light the importance of locating and saving buildings of historic significance―because once a piece of history is destroyed, it is lost forever.”  The reason that stands out to me, in light of the demolition of our town’s first public library, is this one: “When you tear down an old building, you never know what’s being destroyed.” Except in this case, we should have known, we could have known, and we did know.
As Rocchi wrote in her NTHP article, “What is historic, and worth saving, varies with the beholder, but some definition is urgent. Simply put, “historic” means “old and worth the trouble.” It applies to a building that’s part of a community’s tangible past. And though it may surprise cynics, old buildings can offer opportunities for a community’s future.” The Town Board failed to uphold the Historic Preservation Ordinance of the Town of Penfield that was adopted almost half a century ago, and in doing so, failed Penfield residents, both of the future and of the past. 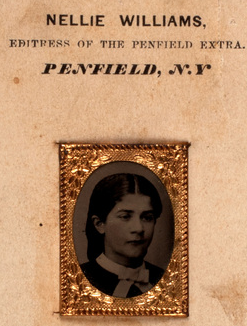 Interested in joining the Penfield Democratic Committee? Come to a meeting to learn more! The PDC meets the 4th Tuesday of each month in the Senior Lounge at the Penfield Community Center, 1985 Baird Rd. Visit our website: www.penfielddemocrats.org!